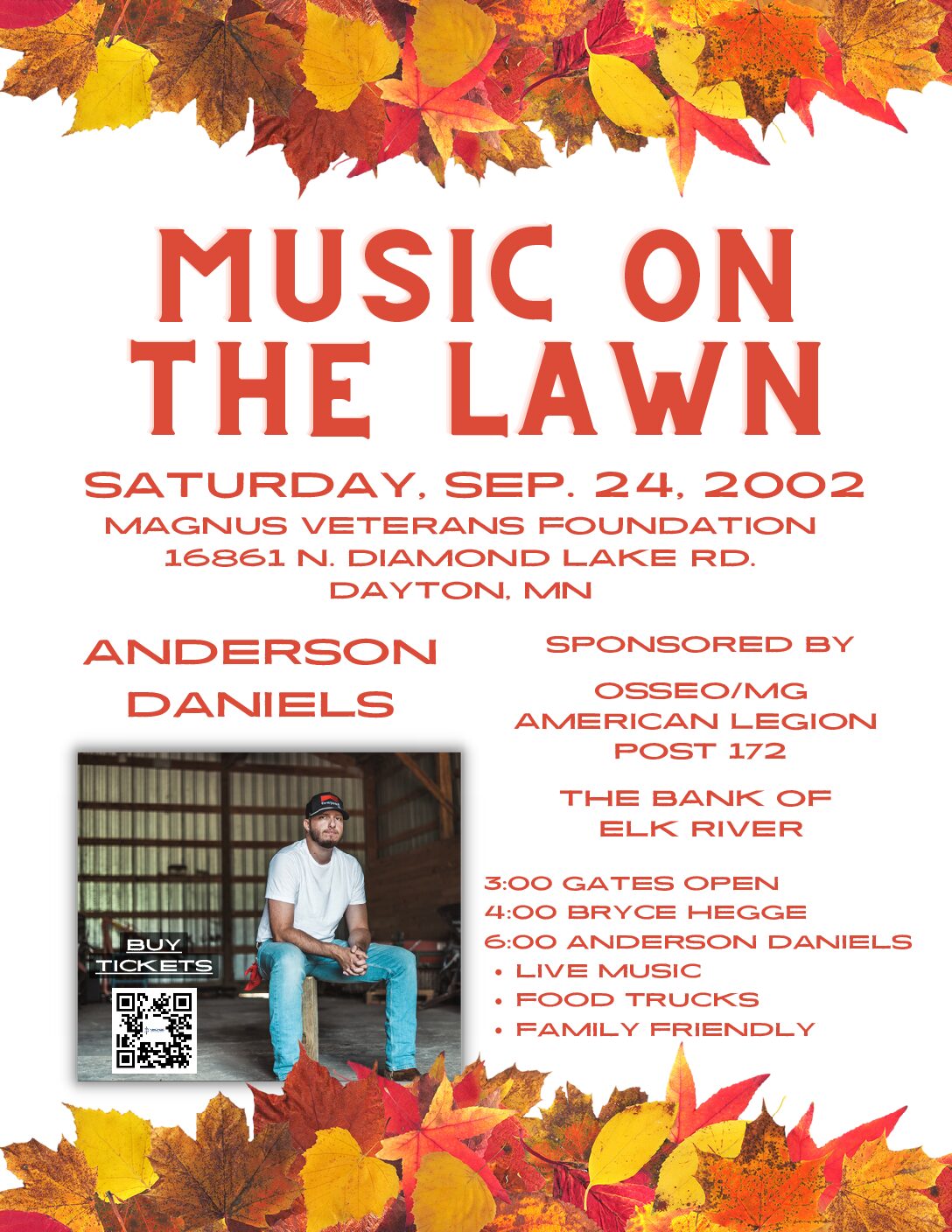 We know you are going to enjoy our Music on the Lawn at the Magnus Veterans Wellness Campus on Saturday September 24, 2022.  We’re featuring Anderson Daniels with Bryce Hegge. Please follow our signs and volunteer parking attendants. Allow ample time to park and get settled. Gates open at 3 PM. Food and adult beverages will be on sale. Show starts at 4 PM. Bring chairs/blankets, umbrellas, canopies, sunscreen, bug-spray – be comfortable. Cash is suggested for the food trucks.

Anderson Daniels is on a straight-line to creating the Midwestern sound in Country Music. Born in America’s Heartland, the 25-year-old Minnesota native takes pride in the blended sound that pulls from his roots. In 2018, Daniels released his first EP titled “Heartland” which debuted inside the top 20 on the iTunes Country Charts. After taking home the New Artist of the Year Award at the annual Midwest Country Music Association Award Show in 2019, followed by a nomination for Male Vocalist of the Year in 2020, Anderson has toured extensively throughout the nation opening for some of country music’s legends and rising stars. Upon entering 2020, Anderson Daniels wrapped up his first headlining tour throughout the country, followed by turning his focus back to the studio in Nashville, TN, to follow up the success of his first release. His brand new single “Town Like This” (released in July of this year) is already nearing 100,000 total streams and is to be followed up with more new music to finish out the year.

We’re bringing back Bryce Hegge for his second concert at Magnus. Bryce Hegge is a 19-year-old singer-songwriter-musician from St. Michael, Minnesota. In addition to writing his own music, Bryce sings a wide range of music, plays drums as well as acoustic and electric guitar, and dabbles on the piano. Bryce has played a variety of venues including The St. Paul Winter Carnival, Minnesota State Fair, and Le Musique Room, as well as opening for Kat Perkins, Chris Kroeze, GB Leighton, Chris Hawkey, Jesse Larson, and a wide range of other artists throughout the Twin Cities area. Bryce’s original works can be found on any music platform including Itunes, Apple Music, Spotify, and Google Play.

It is through the help and generosity of people like you that we are able to continue to provide medical, psychological, physical, spiritual, and social programming services for our veterans and their families.